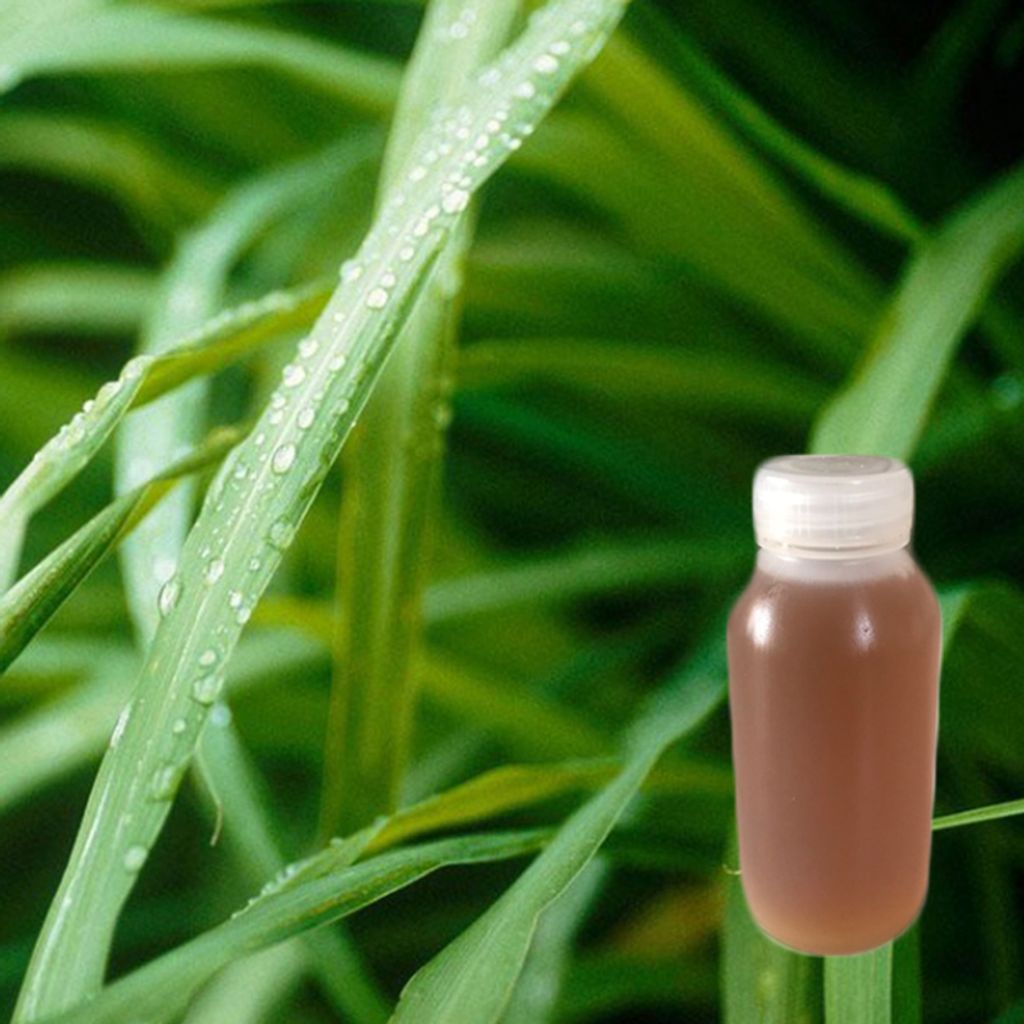 Grows abundantly in India and is cultivated in Ceylon Uganda and the Seychelles. Its

Lemongrass a perennial herb widely cultivated in the tropics and subtropics designates two different species East Indian Cymbopogon flexuosus (DC.) Stapf. and West Indian Cymbopogon citratus (DC. ex Nees) Stapf. East Indian lemongrass also known as cochin or Malabar grass is native to India while West Indian lemongrass is native to southern India and Ceylon. The lemongrasses are cultivated commercially in Guatemala India the People's Republic of China Paraguay England Sri Lanka and other parts of Indochina Africa Central America and South America (11.1-73). The plant grows in dense clumps up to 2 meters in diameter and has leaves up to 1 meter long.

The reported life zone for lemongrass is 18 to 29 degrees centigrade with an annual precipitation of 0.7 to 4.1 meters with a soil pH of 5.0 to 5.8 (East Indian) or 4.3 to 8.4 (West Indian) (14.1-9). The plants need a warm humid climate in full sun. They grow well in sandy soils with adequate drainage. Since the plants rarely flower or set seed propagation is by root or plant division. The plants are harvested mechanically or by hand about four times each year with the productive populations lasting between four and eight years (14.1-9). Extensive breeding programs have developed many varieties of lemongrass.

The quality of lemongrass oil is generally determined by the content of citral the aldehyde responsible for the lemon odor. Some other constituents of the essential oils are -terpineol myrcene citronellol methyl heptenone dipentene geraniol limonene nerol and farnesol (14.1-9). West Indian oil differs from East Indian oil in that it is less soluble in 70 percent alcohol and has a slightly lower citral content (14.1-9).

Cymbopogon nardus is a source of citronella oil. Cymbopogon martinii is reportedly toxic to fungi (1.8-53).

Lemongrass is generally recognized as safe for human consumption as a plant extract/essential oil.

Lemongrass is an herb with a plethora of uses medicinally from being a stomach soother to being an effective insect repellant and fungicide.  A limited study done at the University of Wisconsin revealed that some people taking prepared Lemongrass capsules (140 mg) daily for three months experienced a significant reduction in cholesterol levels and that their cholesterol levels returned to their previous highs when they stopped taking the preparation. Obviously this indicates that Lemongrass may help reduce cholesterol in certain individuals.

Make a Tea and drink 1-4 cups per day to relieve congestion coughing bladder disorders headaches fever stomach aches digestive problems diarrhea gas bowel spasms vomiting flu symptoms as a mild sedative and to promote perspiration - and as a possible cholesterol lowering agent.  Rather than discarding the tea bags use them externally for the problems described below.  An Oil can also be made 3-6 drops of which can be put on a sugar cube for the same purposes as above. The leaves can also be dried and made into a powder for use in Capsules.  Please see the link below for more details.

Externally an Oil can be made with Lemongrass to be applied at 10 drops or so directly to the affected area in cases of athlete's foot cuts scrapes lower back pain sciatica sprains tendonitis neuralgia circulatory problems and rheumatism. It can also be tried on the face to help clear up acne and clean skin pores and the fresh leaves can be crushed and rubbed on the skin as an on-the-spot outdoor insect repellent.

Use Lemongrass in the bath for a soothing aromatherapy experience by placing a mesh bag with a handful of leaves under the running bath water then letting the bag soak in the water with bathe.  Very relaxing.

Lemongrass is considered a sedative for the nervous system and a valuable anti-inflammatory. It assists the digestive urinary musculoskeletal circulatory and nervous systems.

The grass is stimulant diuretic tonic aromatic antispasmodic and a mild counter-irritant. It increases secretion and discharge of urine. Oil distilled from its leaves is used for medicinal purposes. It promotes good digestion and a preparation of lemon grass with pepper has been used for relief of menstrual troubles and nausea. It induces perspiration to cool the body and reduce a fever. Relieves spasms muscle cramps rheumatism and headaches.

EFFECT OF GROWTH REGULATORS IN CITRAL CONTENT IN LEMONGRASS IN DIFFERENT SEASONS:

Effect of growth regulators in citral content in lemongrass in different seasons The purpose of the present research was to evaluate the effect of plant growth regulators in yield citral content in lemongrass (Cymbopogon citratus (D.C.) Stapf) in different seasons. The field experiment was conducted on Sao Manuel Experimental Farm Agronomical Science College Paulista Estatal University Botucatu Brazil which soil was classified in alic yellon red latosol (Haplorthox). Plants were randommly assigned blocks to treatments with three repetitions. The experimental groups consisted of GA3 (50 and 100 mg.l-1);Ethrel (100 and 200 mgl-1); CCC (500 and 1000 mg.l-1); Alar 85 (1000 and 2000 mg.l-1); Accel (20 and 40 mg.l-1) and control group. Five applications of plant growth regulators were realized every other three months. After 40 days of each foliar spray the plants were cut and determined the citral yield. The essential oils were extracted from leaf tissue by hydrodistillation in a Clevenger apparatus. Samples of 250g of leaf and put in Clevenger apparatus with deionized water for 3h to determine the yield of essential oil. The citral content was analyzed by GC. In the present study the concentrations of plant growth regulators used did not increase citral content.

Lemongrass is very helpful for treating certain skin conditions such as Acne rough skin patches open pores and the link. Many have found that adding a few drops to OTC skin treatment products had greatly enhanced them. Skin oils may also be made by mixing Lemongrass with Sweet almond or jojoba oil.

Used in a messageoil Lemongrass may help headaches stress related conditions muscular pain sagging body skin poor circulation and muscle ton. To create a simple message oil use about 4 tablespoons of a light oil such as jojoba and add 4 to 6 drops of essential oil. Mix well and apply in a circular motion (see Aromassage Article for more information on the subject) to spot in need of relief. Lemongrass is also gentile enough to be added to baths in bathoil form or straight from the bottle.

Having a fresh green almost lemon like scent Lemongrass can be blended with other essential oils such as Lavender Juniper Rose Geranium and Eucalyptus. Lemongrass is a top note oil (see Perfume Making article for more information) and will evaporate quickly in a blend. To help prevent this and add extra aromatic qualities pure natural honey may be added.

Today as with many other essential oils it is used as flavoring for food alcoholic and softdrinks a compound in soaps detergents and cosmetics the fresh leaves have been traditionally used in Thai cooking for many years to give dishes a lemon flavor. The perfume industry has found that Lemongrass can give almost the same effect in blends as more expensive scents such as verbena and melissa therefore making the price of the product less expensive. Make sure you read labels of the aforementioned essential oils carefully to be certain they haven’t been adulterated with Lemongrass which will diminish their effects.

Lemon grass extract a Thai medicinal plant has been shown to inhibit chemical-induced carcinogenesis possibly due to modulation of xenobiotic-metabolizing enzymes. The present study has investigated the effects of lemon grass extract and its component (citral geraniol b-myrcene) on phase I xenobiotic-metabolizing enzymes (CYP450 contents benzo(a)pyrene hydroxylase acetanilide-4-hydroxylase aminopyrine and NDMA demethylase) in liver and phase II xenobiotic-metabolizing enzymes (glutathione-S-transferase (GST) UDP-glucuronyltransferase (UDP-GT) and NAD(P)H: quinone oxidoreductase (QR)) in liver and intestinal mucosa of F344 rats. At 5 weeks of age rats were fed with 2.0 0.5 0.1 0.01 g/kg bw. of lemon grass extract or 1.0 0.1 0.01 g/kg bw. of citral or geraniol or b-myrcene by gavage every morning for 5 days. Rats in control groups were given an equal volume of 25% DMSO or corn oil. Rats were killed at the end of experiment liver and intestine were collected to determine enzyme activities. The results showed that phase I enzymes aminopyrine-N-demethylase activity was significantly increased in rat received lemon grass extract or citral or geraniol or b-myrcene. Benzo(a)pyrene hydroxylase activity was increased in citral treated-rats only. No modulating effects on other cytochrome P450 enzyme activities. It was also found that GST UDP-GT activities in liver and colonic mucosa and the QR activity in small intestine were significantly elevated in rats received lemon grass extract compared to those controls fed only vehicle. The GST QR and UDP-GT activities were significantly increased in the liver small intestine and colon of rats treated with citral geraniol and b-myrcene only GST in the small intestine of geraniol treated-rats and QR in colon of b-myrcene treated- rats showed slightly increased. It was suggested that the protection against chemical-induced carcinogenesis of lemon grass may be due to increment of the activities of detoxification enzymes such as GST UDP-GT and QR in the liver and intestines. From the results it may be able to explain antimutagenic property against AFB1 or inhibitory effect on AOM-induced ACF in rat colon of lemon grass extract. Aminopyrine-N-demethylase (P450 2B) activity metabolizes AFB1 to AFQ1 which is the weaker mutagenic substance than its parent AFB1. This enzyme activity was increased in rats received either lemon grass extract or citral or geraniol or b-myrcene which correlates with previous report that lemon grass inhibited AFB1 mutagenesis. Lemon grass extract showed inhibitory effect on azoxymethane (AOM)-induced ACF in rat colon in other previous study possibility due to no effect of lemon grass on P450 2E1 to metabolize AOM to form its proximate metabolites methylazomethanol (MAM) in liver in addition the enhancement of UDP-GT by lemon grass extract may lead to increase conjugation reaction which is the detoxificating pathway of azozymethane (AOM).